Wine Event To Be Held At The Devonshire Arms, Skipton 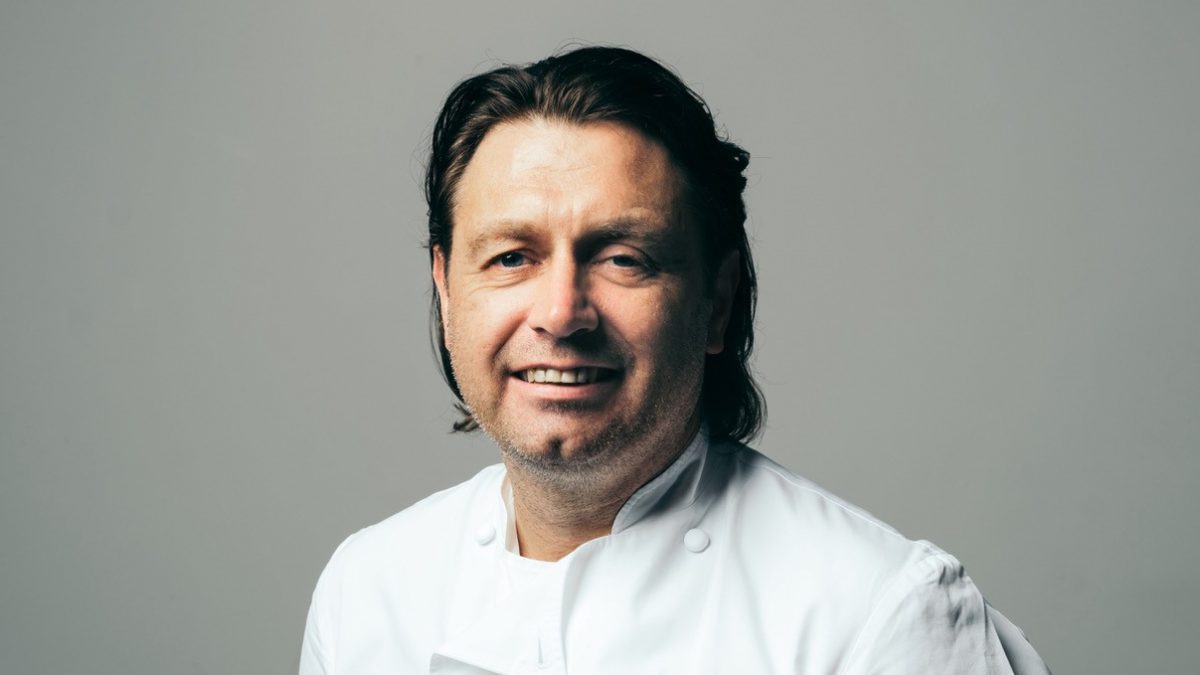 Shaun Rankin’s voice is akin to the start of a F1 race and he’s firing on all cylinders as we chat about the plans for his new restaurant.

“I’ve been designing the concepts, sourcing and procuring items such as the plates and glassware. It’s been quite a big journey.

“The ambition is to try and source producers within a 20-mile radius in the next two to three years. We have a kitchen garden, fruit trees and beehives and we’ve reached out to local growers and farmers. All the flour is locally sourced and the meat is from R&J Butcher’s farm in the Yorkshire Dales.

“We can’t do everything in the first year, but we are growing and fermenting.”

He’s talking about his plans for Grantley Hall – “the north’s most exclusive venue” – which is set to open in Ripon later this summer.

Although TV chef Shaun joined the directors of the development on a consultancy basis 12 months ago, his name is now firmly above the door.

Shaun Rankin at Grantley Hall will feature 38 covers and a chef’s table for up to six guests. “I’m back to running a restaurant and it’s me that will be cooking there and being there with guests and the team.

“I’m not cut out for being sat behind a desk as a food and beverage manager; I like being more creative and I love recipe development, writing cookbooks and the TV shows too,” says Shaun, who’s featured on MasterChef, Great British Menu and Saturday Kitchen.

“We’re working on two menus at the minute; tasting menus and one with a nod to nostalgia, a taste of home – about my time growing up in Yorkshire but done very quirky. I don’t want to say too much as I want it to be a surprise.

“I remember as a young boy sat in my grandad’s greenhouse, on a nice summer’s day, eating tomatoes and bread and butter. I’m working on a dish that’s a greenhouse tomato, where you can smell the calyx, where you get the aromas and the nostalgia.

“I’m taking inspiration from my past. This is me coming back to Yorkshire.” After school, celebrity chef Shaun went to London to start an apprenticeship, which then led to him working in some of the capital’s prestigious hotels such as The Ritz, The Savoy and The May Fair.

“It all started with mum as she was a great baker. She’d make all these fabulous things on a Sunday, so we had supplies for the week or at least until Wednesday; apple pies, sausage rolls, scones.”

After London, Shaun did a stint back in Yorkshire before travelling to Australia, Italy, France, Chicago and Jersey – where he’s been settled for the past 26 years.

“I’ve come full circle. I was born and bred between Richmond and County Durham and spent most of my childhood there,” adds Shaun, who’ll now split his time between Grantley Hall, Jersey to see his sons Ethan, 11, and Harry, seven, as well as travelling to Mayfair, London, to oversee his restaurant, Ormer Mayfair inside Flemings Hotel.

“I originally came here to help with food and beverage, but the kitchen had problems, it wasn’t designed right and that would have caused a situation.

“You’ve got to understand how plates get from A to B, the details that make a place run efficiently.”

“Our cooking will have a very different format, but people will recognise it. Yorkshire puddings are done before the roast, but we think, ‘how can we take it to the next level?’ Do we dry it, dehydrate it, bake it, roll it, create the essence of onion, do an onion mayonnaise with it?

“I’ll be pulling my experience from all over the world, working with accomplished chefs, and using old techniques and new techniques.”

One thing Shaun says he will not be doing is “molecular gastronomy”.

“Yorkshire doesn’t need that. People should expect what asparagus should taste like at the perfect point in its season. Everything will be based around the flavours of the produce. We want people to be taken on a journey, a venture around Yorkshire, and I feel there’s a gap that needs filling here. We’re in Grantley Hall, so it needs to be flamboyant, but we’ll not be overcomplicating food.

“It’s about natural ingredients; our philosophy is about growing, the producers, we want people to be told a story when they’re sitting in the dining room. We’ll be telling the tales of the small holders, the lady with a dozen goose eggs, her free-range chickens; Yorkshire rhubarb, R&J meats. It’s really these heroes which allow us to do our job.

“The real heroes are the growers, the farmers, the producers. Respect is due for their back-breaking work.”

His 100-miles-per hour ethos, enthusiasm and drive is evident. “I love a good project. If you cut me open, it’s in my DNA. It’s my passion. I never go to work. This is a hard hobby,” says Shaun, who never switches off.

“I’d love to get a Yorkshire cookery show off the ground; focus on the people and shine a light on the producers.

“The only time I ever do switch off is when I’m with my boys. They’re so funny. They take my mind off things and I’m usually stood at the side of a football, rugby or cricket pitch.”

For the British chef Shaun, “there’s no place like home and this project is incredibly exciting. Of course, I’m slightly nervous, too – it comes with the territory, but it’s going to be an exceptional journey.”

Her vision is simple: to transform Grantley Hall into the best country house hotel and spa in the north. It’s a bold one, but 75-year-old Valeria Sykes’s mind works in marvellous ways – and she’s hands on, too.

While on site, she’s wearing her pink high-vis jacket with “Mrs Sykes” printed on the back.

The original, Grade II* listed Hall has 21 bedrooms and suites. The new Fountains wing has 26 bedrooms arranged around a mezzanine courtyard with a spectacular glass roof.

And Valeria certainly doesn’t do things by half. The Three Graces Spa and ELITE, a luxury gym and wellness retreat, will be run by champion rower Duncan Roy.

It will come complete with an altitude training facility, underwater treadmill, cryotherapy chamber and a state-of-the-art wellness centre with allergy testing and a 3D body scanner that can check bone density. Of course, there’s an 18-metre pool, snow and steam rooms, too.

The new Garden Pavilion will contain the Grantley Suite, which holds 180 people for conferences, weddings and events – and will be headed up by banqueting chef Lucy Hyder. 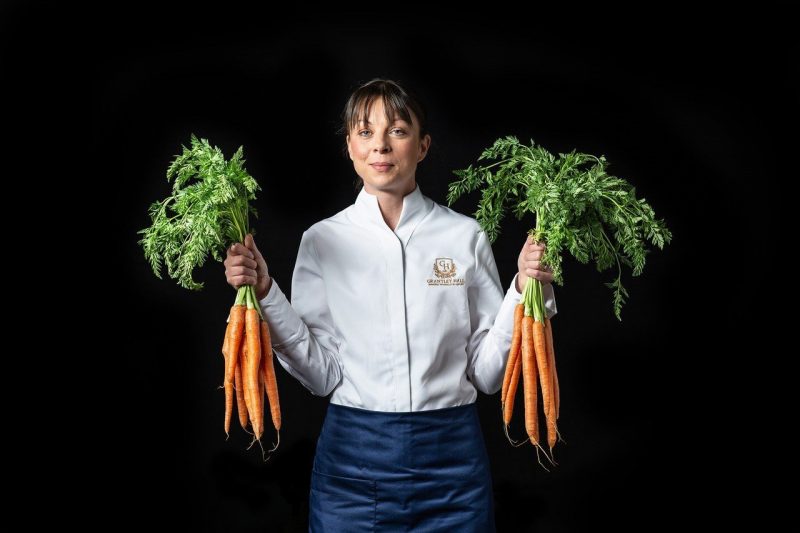 It will also feature Valeria’s, a champagne and cocktail bar and each of the restaurants at Grantley Hall will have their own theme. EightyEight will take guests on a sensory journey of Asian cuisine.

Fletchers is all about casual, all-day dining and there’s The Drawing Room – where afternoon tea will be a grand affair.

With such a valorous vision, Valeria has pulled in heavyweight names and chefs Craig Atchinson and Ben Iley will be flexing their culinary muscles in the kitchens.

Craig will be heading up Fletchers after leaving his former role, the 3 AA Rosette Hudson’s by Craig Atchinson restaurant at The Grand Hotel in York. 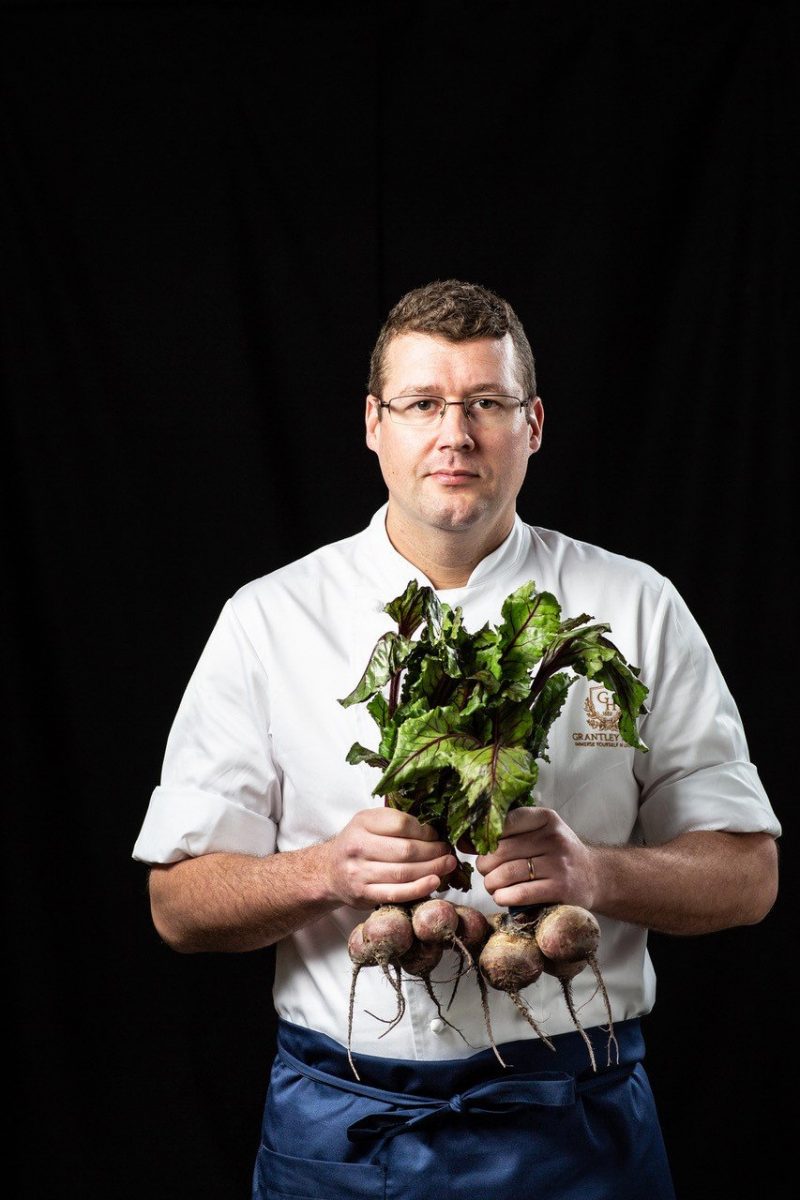 “It was a hard decision,” he confesses. “I’d heard about the project a while back and the investment in it, that was enough to sell it to me.”

Craig plans to use his fine-dining prowess and supplier contacts to dazzle guests eating at Fletchers.

“It’s the main hotel restaurant, with multi outlet kitchens: breakfast, lunches, evening meals. I’ve just put the first draft menu together, which features some familiar favourites. There are no gimmicks but I’m a fine dining chef and it’s been hard to develop simple dishes without getting too excited. I’ve stripped things back and I’m really excited about what we’ll be delivering.

“There will be classics on the menu, but with my own twist and we’ll be interacting with guests, too, pouring sauces at the table; the focus will be on top service and the guests’ journey.”

Overseeing Asian Restaurant EightyEight is Ben Iley and having spent time cooking on three different continents and in four different countries – as well as living in Japan for nine years – he’s well equipped for the role. 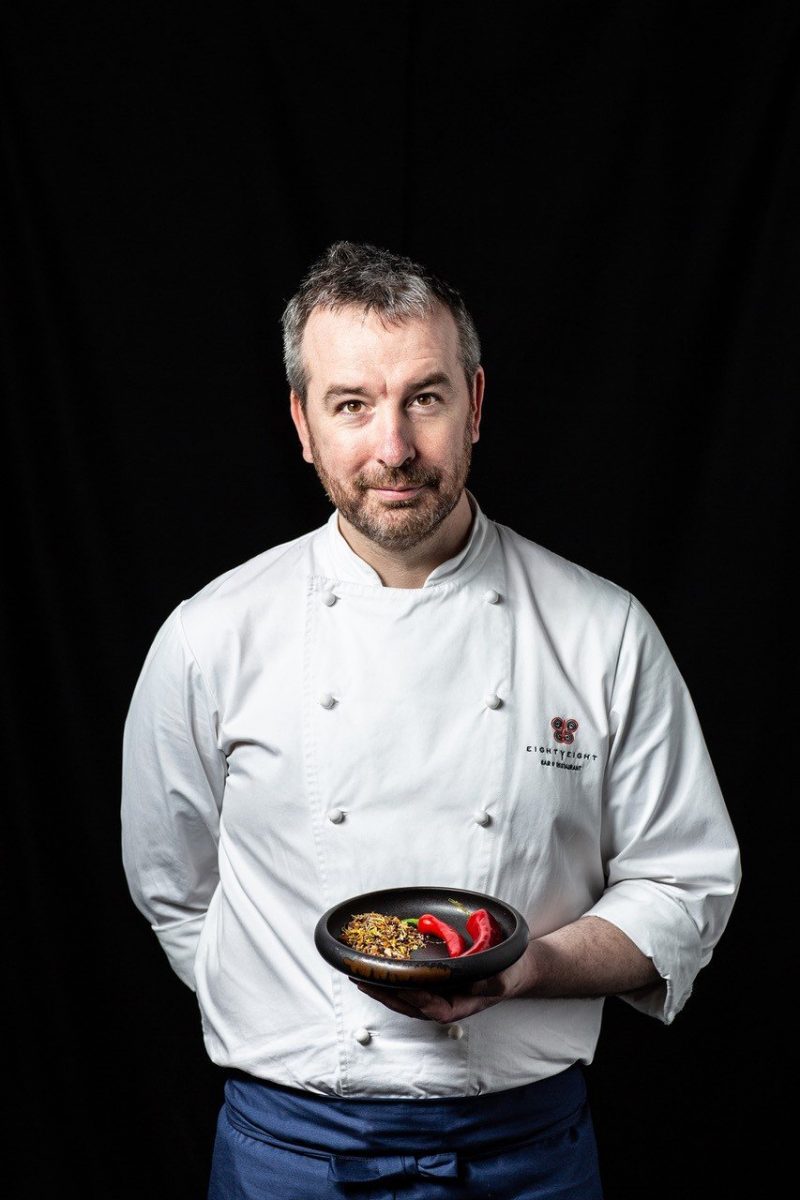 “We’ll be championing Yorkshire produce, but with Asian influences. We’ve got such a huge larder now that we can make things interesting again,” says Ben, who was instrumental in opening Ox Club, Leeds, three years ago.

“We’ll have things on the menu such as local venison tataki, like carpaccio, with ponzu sauce and buckwheat. We’ve got an excellent salt-aged duck from R&J Butchers, and I’ll be doing Yorkshire’s take on Peking duck.

“There will be a lot of fire and smoke too – and I need to find a good Yorkshire wagyu,” adds Ben.

His menu will focus on “good, local food that’s in season” and he says writing the menu from scratch has been “nervous and hugely exciting”.

“I’ve never had to write a menu on my own and dictate what it’s all about. Grantley Hall is mind-blowing. It truly is something else.”

Ben will be taking his experience from working around the world and channelling it into his menu.

“Thai food is so much fun, there are so many flavours, but there will be a strong nod to Japan and China.” 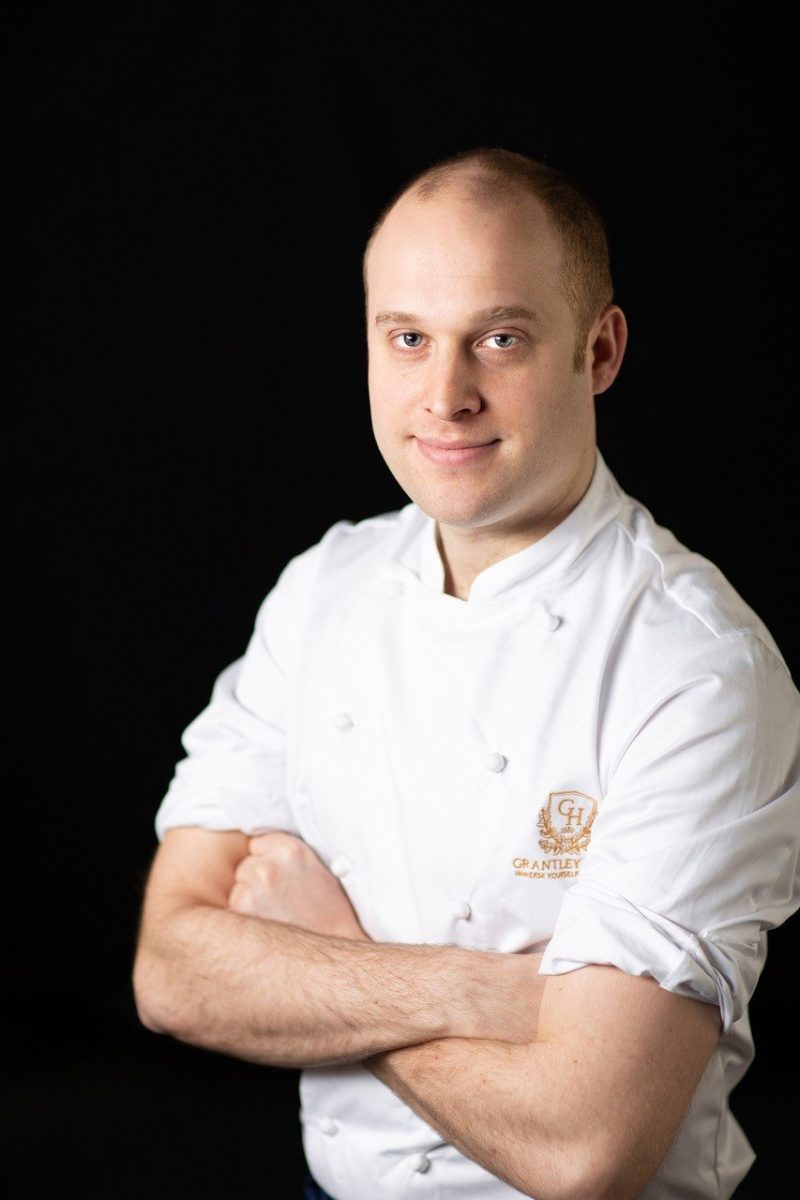 For more information about Grantley Hall and its grand opening on July 6th, visit grantleyhall.co.uk 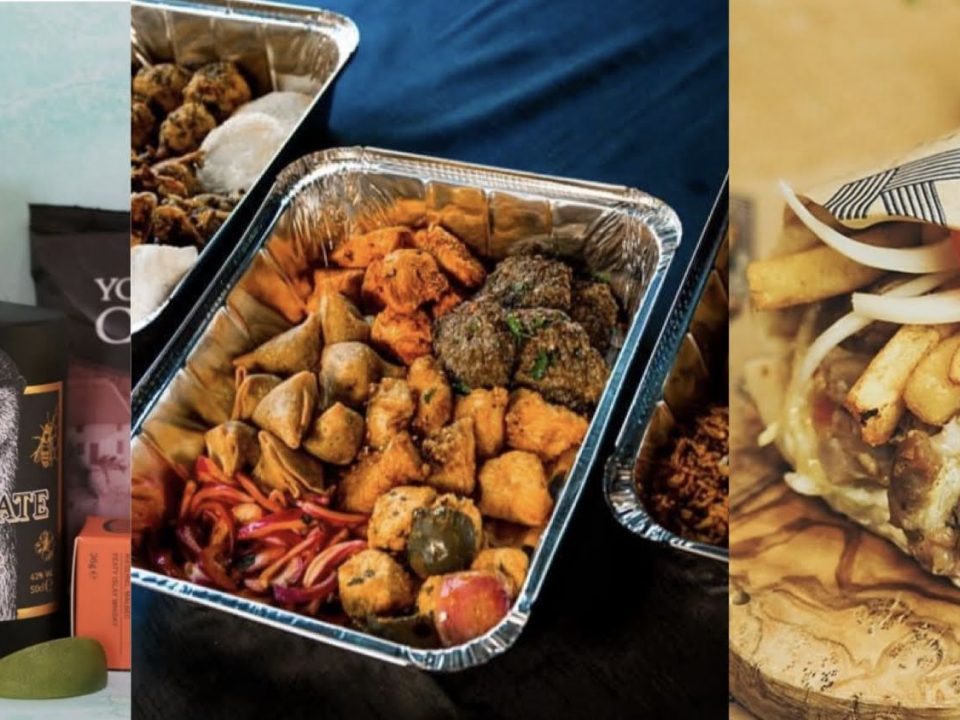