Anna Hedworth is the cook and owner of Cook House in the Ouseburn Valley in Newcastle. Savour’s Feature Writer Rosie Jenkinson chats to her about her successful Kickstarter campaign, new move and upcoming cookbook.

The term ‘foodie’ perfectly describes Anna Hedworth. She runs her own kitchen space from a shipping container in the Ouseburn Valley called Cook House – where she makes everything on the menu from the chutneys, jams and pickles to the cakes and salad dressings.

Her story doesn’t start with qualifications in cooking or working her way up in kitchens, but as a former architect. “I did architecture at university in Edinburgh and then started working for a little firm in the Ouseburn called Xsite Architecture, and I was there for eight years,” says Anna. “I didn’t love it. I knew quite quickly that it wasn’t for me but I didn’t really know what else to do.”

Outside her day job, Anna developed a love for cooking and started hosting dinners and inviting people around. She then started a food blog, The Grazer, and growing produce in an allotment, as well as organising food markets and events in the local area.

“I couldn’t just leave my job as I needed to get paid at the end of each month, I had bills. So I made up my own version of a job in food, alongside my job in architecture, and started doing casual pop-up things that I could manage at the same time, and then realised that this is what I wanted to do.”

She did both for two-and-a-half years which was “quite intense and hard work” but gave her the confidence to realise it was the right path and to leave her job. “I knew if I advertised for a dinner, people would come. The tickets would sell out.” 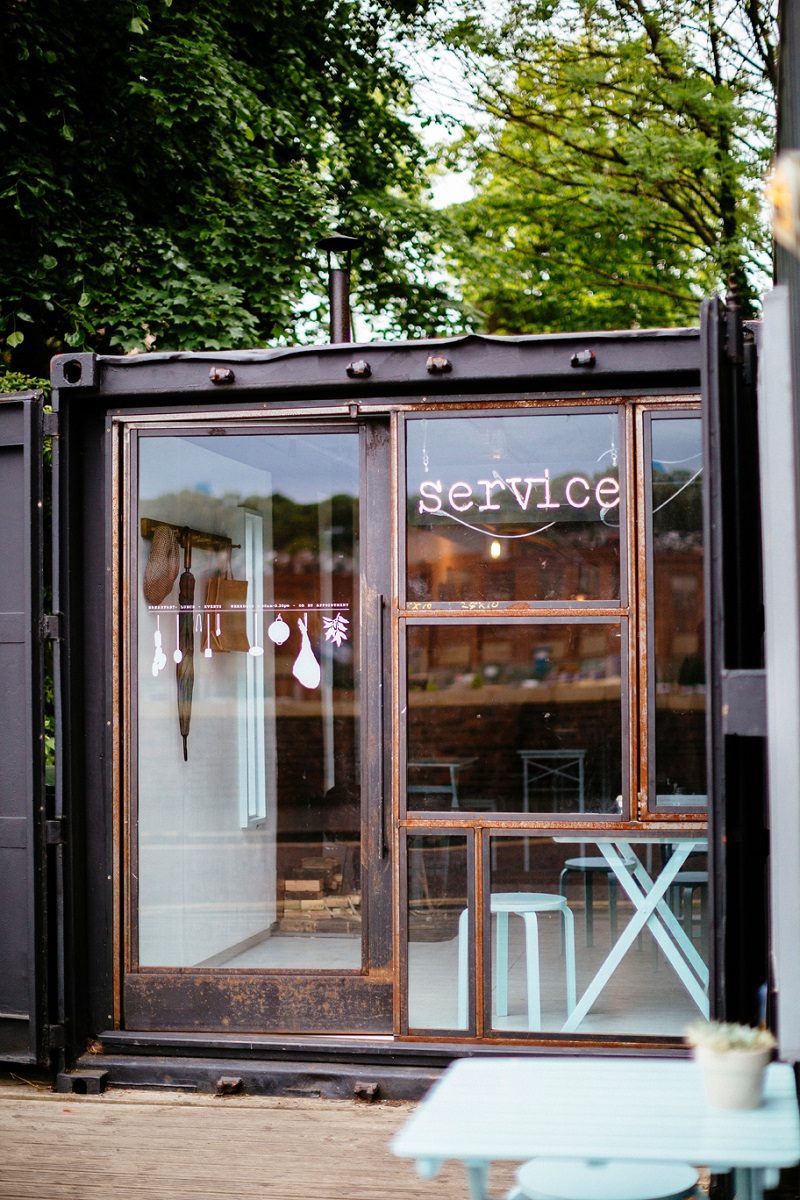 The next step was finding her own place. She had worked on a shipping containers project while working at Xsite but didn’t even consider it as a venue until her other half pointed it out. It had originally been conceived to be a casual events space for people to exhibit in, but the only thing that had happened was Anna asking if she could use it to host pop-up dinners.

Moving into the shipping containers didn’t seem as scary a leap as opening her own restaurant. “It wasn’t like this was a proper restaurant, it’s a restaurant that I could put together for a few thousand pounds,” explains Anna. “I did it to suit myself. I know that I can prep this amount in the morning and be ready for lunch, and for however many customers, this is how much food there is.”

Cook House opened in August 2014, and has since amassed a loyal following. However, there are limitations to working in a shipping container. “We don’t have enough storage space, we don’t have enough cooking space, we can only cater for a small amount of customers as the oven is small and the fridge is small,” explains Anna. “It’s leaky and this winter we just froze solid for five days, it was really bad!”

She had originally thought of expanding her original space by adding more shipping containers, but then she was informed that the land across from her was going to be redeveloped and that the area would be a building site for two years.

“So, for me, investing my money in expanding here was not a wise idea,” Anna says. She started looking for somewhere else and had a few plans of where Cook House could go, but when a building in Ouseburn became available – she knew it was the right place.

“It’s perfect because it’s got loads of space it’s right bang in the middle of the Ouseburn, and it allows us to do everything we want to do and stay in the same place.”

She had budgeted for expanding the shipping containers, but not a full property move. As she didn’t have enough money to move to the new venue, Anna decided to do a Kickstarter which was “a bit of a leap of faith”.

“I got the idea after seeing Gary Usher’s [executive chef at Sticky Walnut] Kickstarters,” says Anna. ““I had looked at his and thought, ‘Actually, this is achievable as he’s offering something tangible’. So I did the same as what he did. I asked someone to buy their ticket for dinner or lunch now, in the same way you pay for the theatre now.”

“I really didn’t know if it would work or not, and it was quite nerve-racking. I thought, if it fails we’re just screwed basically and it would look really embarrassing, but it didn’t.”

Anna’s Kickstarter Campaign smashed its £28,000 goal with 387 backers pledging more than £34,000. “I knew we had a lot of nice customers, but there were more people than I realised that were quite invested emotionally in the place.”

Cook House’s new home on Foundry Lane will still retain the essence of the original Cook House but will also have a grocery shop, cafe and bar, events space, upstairs dining space with open kitchen and outdoor dining terrace area.

“I’m excited to serve dinner and to have an alcohol licence so people can actually chill out and have a glass of wine and have something nice cooked to order,” enthuses Anna. “Here [at the original venue] we’re so limited that we have to prep everything in advance and it’s more assembling than cooking.

“The menu is going to blend from one thing to the next. There will be the breakfasts like we do at the minute which are grains, fruits, granolas and yogurts, and also a hot brunch like salt beef hash and baked eggs. Then into the lunch of small plates of meats and cheese and salads and pickles, and then kind of bigger sharing things we’ve done for supper clubs in the past that people can order for the whole table, like a leg of lamb or a whole roasted cauliflower.”

Although there have been a few delays, like a flood in the basement which has meant the whole floor has been ripped up to put new drains in, the venue is still on track to open this Autumn.

As well as the new move, Anna is writing and photographing her debut cookbook. A literary agent had approached her last year about whether she would ever be interested in writing a book. Anna said, “yes” but didn’t really know what it would be about. Then she thought, “I could write about what I’ve done” – how she had left her job to follow her true passion and inspire other people, as well as being full of food recipes.

Her proposal was sent out to publishers in February this year, and a small independent in London (who have recently won Independent Publisher of the Year) called Head of Zeus picked it up.

“I put together a list of everything I wanted to include which came to about 200 recipes,” laughs Anna. “They made me whittle it down to 100 which was really difficult, but now it has a nice balance of the seasons, of things that are easy and that are really complicated (but interesting), and of different types of dishes too.”

“It’ll be out in September 2019 in time for the Christmas market. Hopefully it’ll be on everyone’s Christmas list!”