Tesco has dropped one of its biggest suppliers of pork after animal rights campaigners released shocking footage of pigs screeching in terror as farm workers kicked them, slammed gates on them and hit them with metal rods.

The supermarket has banned meat from Hogwood Farm in Warwickshire after activists from Viva! filmed images on hidden cameras which, they claimed, exposed ‘systematic animal abuse’.

In a statement to the Mail on Sunday, Tesco branded the footage “distressing and unacceptable” and claimed that Hogwood Farm is “well below our high animal welfare standards”, stating that the farm would be dropped with immediate effect.

The footage shows piglets kicked and thrown by farm workers, terrified pigs struck with metal riding crops and hand tools, confined pigs being painfully injected and dead pigs dumped into rotting piles. Shockingly, pigs were still being brutally bitten and bullied by others, unable to escape the constant attacks. 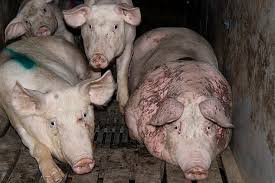 Viva! founder Juliet Gellatley said: ‘We cannot express how much this victory means for us and the Hogwood Farm pigs.’

The move comes a year after the group revealed disturbing images of cannibalism at the farm. 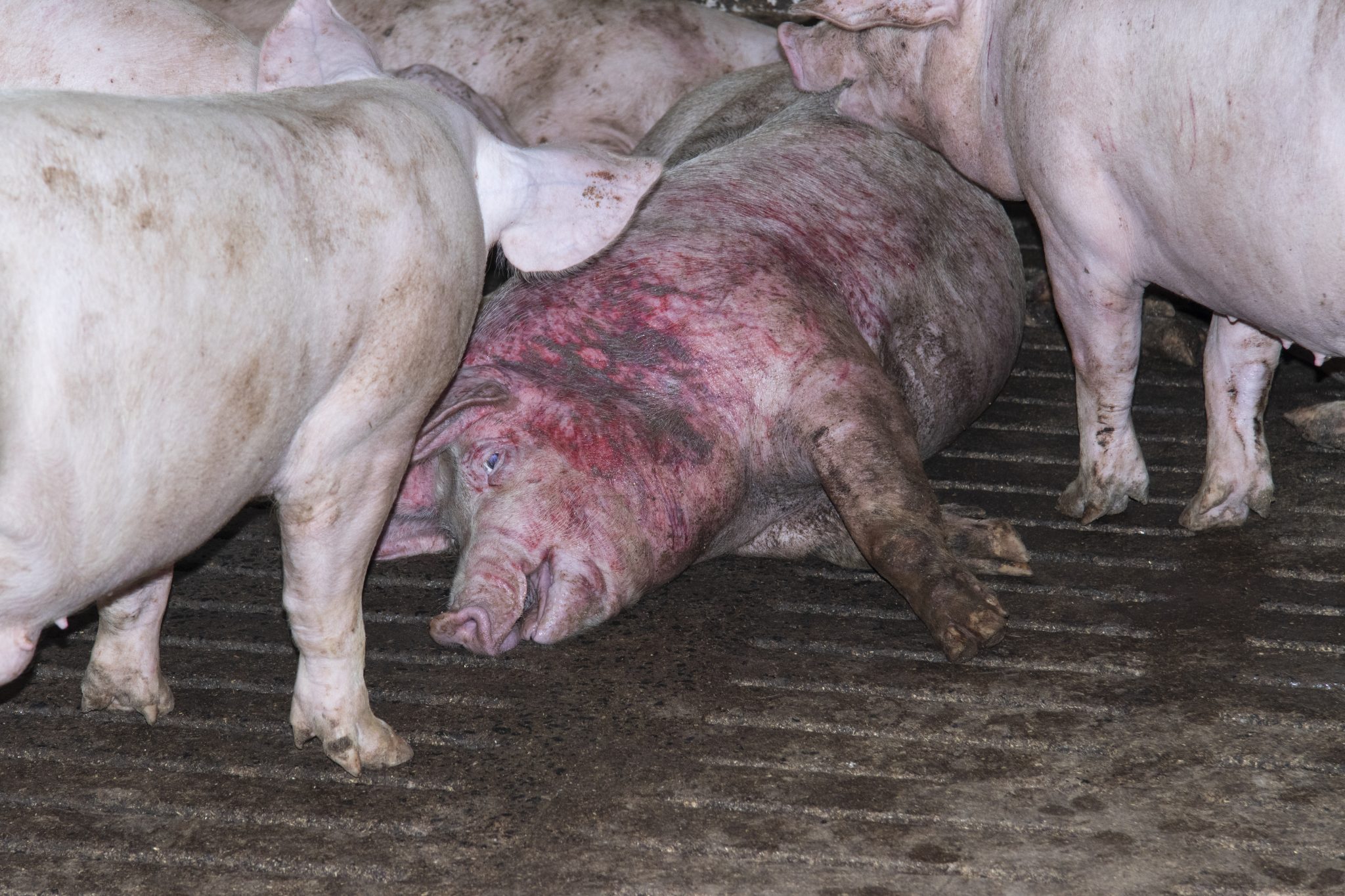 Owner Brian Hobill told Channel 4’s Dispatches earlier this year that it had ‘better conditions than most nursing homes’.

Officials from Red Tractor, the RSCPA and the Animal and Plant Health Agency (APHA) initially found no breaches of animal welfare and Mr Hobill spent £50,000 on heavy-duty fencing turning his farm into ‘Fort Knox’.

On July 8, Viva! managed to breach the security and installed two hidden cameras on the farm and filmed workers for the first time abusing animals. Three other cameras were hidden over the week. All were removed on July 14.

The footage showed that, two years after they first infiltrated the farm, the pigs were still kept in horrendous and filthy overcrowded pens – and were so distressed that they are attacking each other.

One of the most horrific images was of a gilt – a sow under a year old – who was being bitten and bullied by other pigs: she spent nearly 48 hours in the pen before the farmers removed the swollen animal covered in sores.

Viva! filmed animals screeching in terror as farm workers ruthlessly kicked them, slammed gates on them and hit them with metal riding crops.

Pregnant sows were forced to give birth on barren, filthy pens with concrete floors and no bedding and lie on their sides for five weeks, unable to reach their piglets, many of whom did not survive the harsh conditions. Those that did had their tails cut off without anaesthetic. 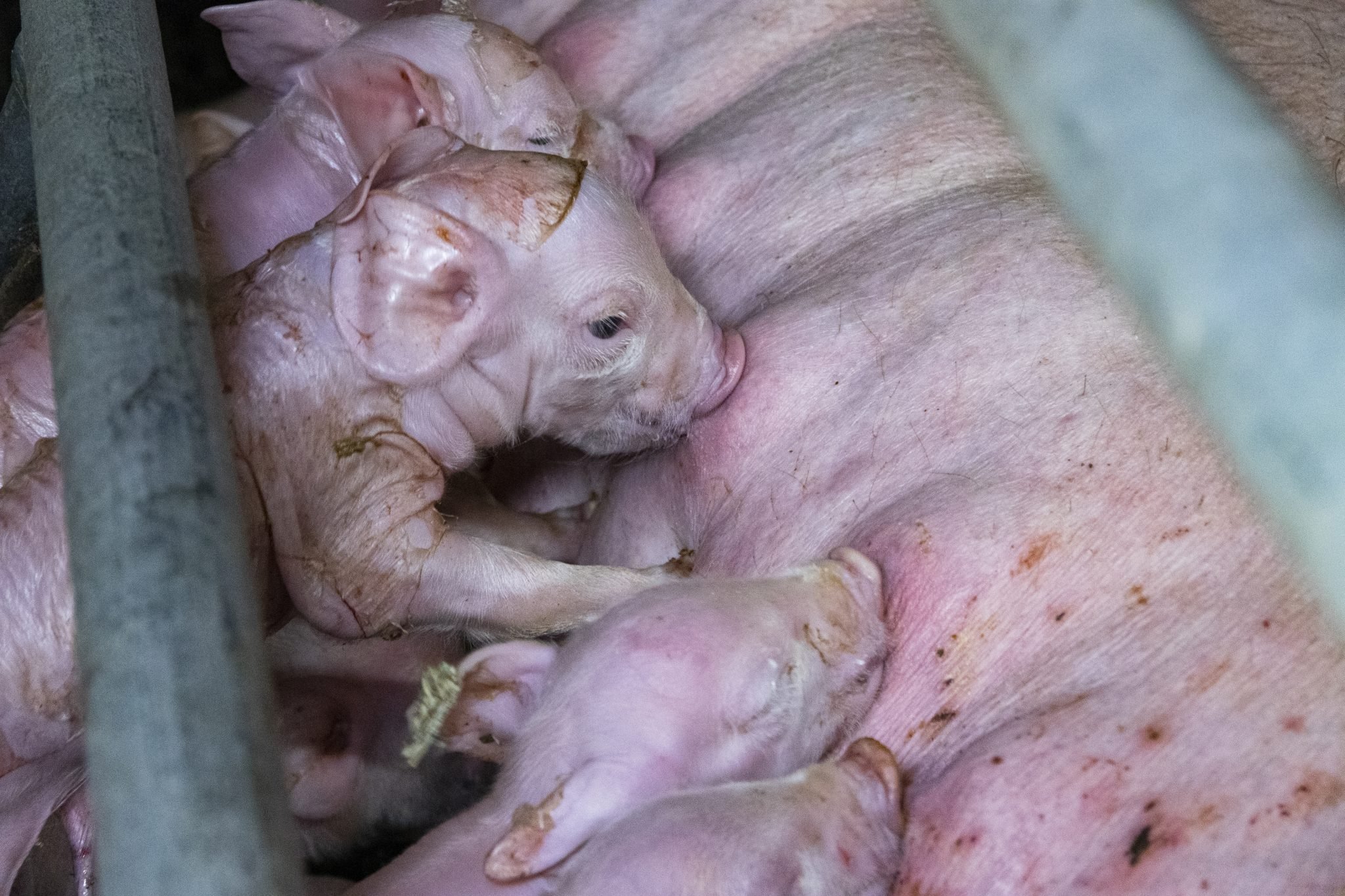 They then faced brutal conditions in which they were rough-handled, kicked and hit by farm workers and slammed on concrete floors. Viva! filmed one piglet, which was barely alive, being thrown down the side of a farrowing plate.

Even the dead animals were treated with disregard. Dead pigs were ruthlessly dumped in gangways before being thrown in bins while dead piglets were piled in filthy buckets and left to rot, contravening Defra guidelines which say they should be removed swiftly.

Viva! founder Juliet Gellatley said: “This news is a huge victory! We cannot express how much this decision means for us and the thousands of pigs trapped inside Hogwood Farm.

“The animal cruelty that our team witnessed on Hogwood Farm cannot be easily forgotten. Over the past two years, there has been complete inaction by industry bodies, with meaningless assurances that they are working to improve standards. But finally, with this undeniable evidence, animal welfare has come before profit. We couldn’t be more thrilled!

“Since our first investigation, the farm owners have invested thousands of pounds into increasing security at Hogwood. Rather than improve conditions for these poor animals, they invested in making it more difficult for the public to see the truth. Now, the truth is finally out and consumers will no longer unknowingly support Hogwood Horror Farm.

“Although we congratulate Tesco and Red Tractor on finally making the right decision, I can’t help but question why it is routinely left to animal welfare groups like Viva! to expose the abuse taking place on farms. Factory farming is an inherently cruel business and we hope that this exposé shows that assurance schemes like Red Tractor cannot be trusted.”

TO WATCH THE VIDEO FOOTAGE RELEASED BY VIVA! CLICK HERE